Five cities have been selected to replicate Providence Talks... 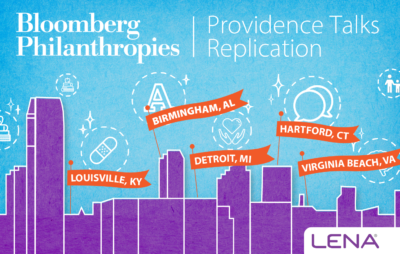 by Bloomberg Philanthropies on Tuesday, September 24, 2019

Five cities have been selected to replicate Providence Talks, one of the first early language initiatives implemented at the municipal level, with support from Bloomberg Philanthropies.

Providence Talks launched in 2014, after the City of Providence, RI, won the grand prize in Bloomberg Philanthropies’ 2013 Mayors Challenge with the idea to launch a city government-led intervention to promote language and interaction between children and their adult caregivers. In partnership with local nonprofits, Providence Talks has used LENA “talk pedometer” technology in home visiting, playgroups, and professional development to help parents and teachers learn to increase the quality of children’s language environments.

The three-year project will launch in five cities across the United States this September:

These new sites will join 100 communities around the world that are implementing LENA programs to provide caregivers with coaching and feedback to increase interactive talk with children, a key factor in early brain development. LENA programs are on track to reach 10,000 children in 2019, and these innovative, scalable replications will increase their impact even further in the coming years.

“We’re excited to partner with these cities to build strong families and high-quality classrooms nationwide,” Dr. Stephen Hannon, president of LENA, said. “Our vision is that every child enters kindergarten ready to succeed. By increasing the quality of the early language environment, adults can help children develop the social, emotional, and cognitive skills to excel in kindergarten and in life.”