Parents may want to have a few words with their children bef... 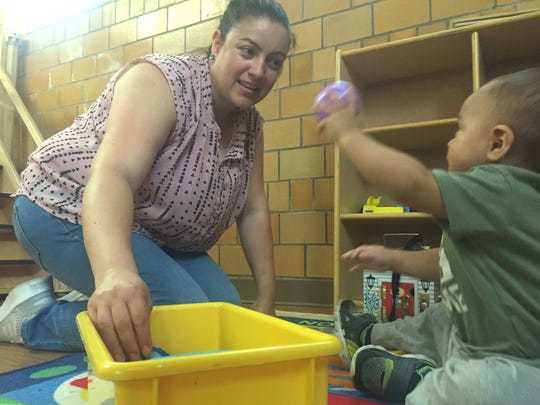 Parents may want to have a few words with their children before sending them off to school. But ideally, they should have millions of words with them before the first day of class.

Researchers say that the number of words a child is exposed to in the first four years of life can have a big impact on their brain development, language acquisition, and school readiness.

Researchers say that children from disadvantaged backgrounds tend to hear far fewer words than children in higher-income families, leaving them less prepared when they get to school.

So how can parents know whether their child is hearing enough words? By counting them.

Detroit is one of five cities chosen to launch a new program that equips children with special recording devices known as talk pedometers. They work like regular pedometers but instead of counting steps, they count how many words a child hears and speaks during the day.ADVERTISING

The data is then used to assist parents in upping the word count for children as a way to prepare them to excel in school.

Detroit is the largest city being funded for the program and perhaps the neediest. In Detroit's public schools, just 11.9% of third-graders were considered proficient at reading, according to state test results.

The other cities are Birmingham, Alabama; Hartford, Connecticut; Louisville, Kentucky, and Virginia Beach, Virginia. The program was dubbed Providence Talks after it was piloted in Providence, Rhode Island. Early results there show it's helping kids do better in school.

“We are focused on helping cities test new ideas and then helping the best of them spread," said James Anderson, head of the government Innovation programs at Bloomberg Philanthropies, which is pouring $12 million into the effort across the five new cities. "The model has the potential to impact families well beyond Providence. We are very excited to expand the effort to five other communities similarly focused on improving early childhood outcomes.”

Detroit's version, 313 Speaks, is to launch next month.

Beginning more than 20 years ago, researchers started counting words in different environments and extrapolating the results to measure how many words disadvantaged children were missing out on.

"So the gap is about 30 million words during the course of four to five years when the child is in development," said Kenneth Wong, a professor, and director of the Urban Education Institute at Brown University, which has been studying the results of the Providence Talks program. "That's an enormous gap. The question is, what can we do about that challenge so that they can come to school prepared?"

The program uses the word pedometers, typically clipped to a child's clothing, to capture audio during the day. It's not designed to be an eavesdropping program. It logs the number of words a child hears and speaks and how many turns the child takes entering a conversation.

Researchers say that a minimum of 15,000 words a day is needed for strong language development, but many children from low-income households often get a fraction of that.

In Providence, low-income families were asked to volunteer. They agreed to use the devices and then meet with program workers to review the data. The program started with the workers visiting parents at home but it has evolved into a playgroup model, where groups of parents bring their children to a local library or community center.

The program workers still review the numbers with the parents and offer suggestions on how to increase the number, but also on engaging the child in conversations throughout the day, such as reading more stories, having discussions about everyday activities like getting dressed, making a meal or cleaning up, and asking questions of children to get them to engage in conversation.

The program tries to instill "the habit of reading, the habit of talking, turning off electronics, playing with their children, getting that dedicated time and being a little bit deliberate about the back and forth, asking them more certain kinds of questions, just having that relationship, " said Kimberly Fernandez, executive director of Federal Hill House in Providence, which has administered the Providence Talks home and playgroup models since 2015. "So even though we're not teachers, we are parent educators and coaches. We want parents to feel like this person has the best interest of my family at heart."

Wong said the about 3,000 kids have been in the program in Providence, including about 1,000 who have graduated from it. The results are still early, but the indications are positive.

"We're seeing that the parents are speaking to their children more often, and they are having more conversational terms," he said. "So the evidence is clear that for those who started at a low level, now, they were able to actually increase their words spoken to their children in a significant way."

Wong said that graduates of the program are beginning to enroll in kindergarten now. The number of them is small for statistical purposes, but there are signs of progress there as well.

The researchers tested kids for reading benchmarks at the beginning, middle and end of kindergarten.

He stresses that the sample size remains small but the results are consistent.

Emily Taveras, 32, of Providence enrolled in the program with her daughter, Elena, 3, last year and got a lot out of it. She said that wearing the device made her more conscious of speaking to her child.

"It was only once a week that she had to wear it, but yeah, that definitely encouraged me to do that more," she said. "Honestly, she was more comfortable being around other kids."

Providence Talks was the first one launched with Bloomberg donations, but it is now receiving money from the city of Providence and other nonprofit groups as well, Fernandez said.

Detroit's 313 Speaks is being administered by Brilliant Detroit, a nonprofit neighborhood organization that works to improve health, education, and community.

Detroit plans to start with the playgroup model, where families will visit Brilliant Detroit facilities in neighborhoods.

A similar program has already been running on a small scale in Detroit. Known as LENA, an acronym for Learning Environment Analysis, the program uses the same model of recording, analyzing and encouragement for parents.

The 313 Speaks program will vastly expand that effort, starting with about 300 kids in the first year and growing from there, said Cindy Eggleton, executive director of Brilliant Detroit.

"So, to start, it will be run out of our locations, which are technically houses in the middle of neighborhoods that serve as family hubs, providing programs and services," Eggleton said. "We will be implementing it in a few different ways. It will be implemented in playgroups at different provider locations, there will also be a home visiting component to it as well."

In addition to the advice on upping the word count, parents and children also get other resources, Eggleton said.

"They get books at every session, as well as tons of resources to take home," she said. "So we have a lot of culturally relevant books each week in place so that every time they go home with something like that."

The program will be offered in both English and Spanish.

Sandra Huerta, 34, of Detroit, enrolled her son, Emiliano, 14 months, in the LENA program when he was just a few months old.

"They teach us how to connect with the baby, and how important it is talking to them," said told the Free Press this week. "Since I started the program, I thought I was speaking enough to my baby, but I learned that I really wasn't and that I could speak more."

Huerta, who immigrated to Detroit from Mexico three years ago, said that when she's cooking or cleaning dishes, she will tell Emiliano what she's doing, describe it using words so that he connects the words to her actions.

"If he's like trying to get something and I tell him, 'oh, you are trying to get the ball or you're trying to get whatever,' " she said. "I'm explaining to him everything he's doing or everything I'm doing. I started doing that when he was like 3 months and now I can see he really understands everything. If I tell him to go find your shoe. He goes to find his shoes."

Roestelys Poleo, 37, of Detroit, enrolled her son, Ethienne, 1, in the LENA program in June, and has already seen results. She speaks Spanish at home and uses Spanish to speak to her son, who is talking more since he enrolled.

Her advice to parents considering it?

"They should take the course," she said through an interpreter.

Not every child in Detroit can be fit into the program, but researchers say that any parent can take the basic concept, conversing more, and give a child an advantage.

City officials are excited about the effort.

“We know that over 80% of a child’s brain development occurs before the age of 3. We also know that exposure to language is a key driver of early literacy," said Eli Savit, a senior adviser to Mayor Mike Duggan who has worked on the program. "313 Speaks builds on a nationally proven model that has demonstrated success in Detroit. Through this partnership, we expect to reach approximately 3,000 families over the next three years — helping to put thousands of children on the path to early literacy.”